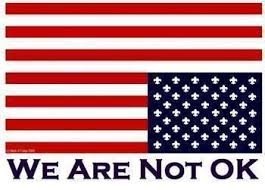 Clinton won. The Electoral College is outdated. The system is rigged.

The first statement is both true and false. Mrs. Clinton won the popular vote but not the Electoral College. The second statement may or may not be true. It’s a subject open for discussion. The third statement hopefully is false.

For the vast majority of America’s who cast their votes for Clinton the Electoral College is what rigged the system this election. Only in a Presidential election can the person who gets the most votes still lose. Is it time to rethink the Electoral College? Given the number of times the popular vote has been overruled we must seriously ask ourselves if the 12 Amendment is still serving us well?

Ronald Reagan said “Trust, but verify.” For those who feel there is a possibility that some devious actions occurred in certain areas of certain states, the only way to put the matter to rest is to audit the votes and do a recount. The Clinton Campaign did not initially feel a recount was warranted.

There have been numerous times when recounts have been called for in both local and national elections. In many states there is an automatic trigger. They are meant to ensure that the election is fair.

What the Clinton Campaign was reluctant to do  Jill Stein, the Presidential candidate of the Green Party, was not. She called for recounts in three states and as of this date raised  over $6 million dollars towards the current stated goal of  7 million dollars for the effort in a little more then 72 hours. The only question is why did Stein, a Third Party Candidate, whose name did not appear on all 50 states ballots and who only received 1.1% of the votes in Michigan, 0.8% in Pennsylvania and 1.1% in Wisconsin call for the audit?  It was a ballsy move. One that puts her and the Green’s front and center.

If election tampering and fraud is discovered the United States will be confronted with a Constitutional Crisis of Epic Proportions. Stein will be lauded for exposing the failures of the system. The Green Party would stand to gain hundreds of thousands of new members and the opportunity to be a major player in future elections.

Four times in this nations history a candidate has been elected President without receiving the popular vote. In the case of John Quincy Adams vs Andrew Jackson, Jackson won both the popular vote and received more Electoral College votes but failed to get the 131 votes needed to be declared president. This was the only election decided in the House of Representatives.

Rutherford B. Hayes won the election of 1876 against Samuel J. Tilden by just 1 vote. Tilden received 250,000 more popular votes than Hayes. Many believe it was a compromise to get the Union Army out of the South after the civil war, thus effectively putting an end to Reconstruction..

Benjamin Harrison beat Grover Cleveland in the election of 1888, despite the fact that Cleveland received over 90,000 more votes.

The last time this happened, George W. Bush vs Al Gore  in 2000, Gore received 540,000 more votes. The nation held it’s collective breath as Florida and the hanging chads left the nation hanging in suspense. Enter the Supreme Court with its 5-4 decision that effectively ended the recount and declared Bush the winner. That was the only time the Supreme Court ever got involved in deciding an election.

By auditing votes in Wisconsin, Michigan and Pennsylvania we will see just how secure our election process is. If tampering in those states is discovered we are faced with serious security problems that undermine the fragile fabric that holds us together. We are also faced with the dilemma of how do we correct a fraudulent election.  It may not be as simple as just declaring the real winner over the person that was declared the winner before the fraud came to light.

A few words of caution: