Several years ago I decided I just could not face shopping and spending three days cooking another Thanksgiving dinner. It has been been our habit to go to Napa, stay at the Silverado and have our Thanksgiving meal at the wonderful spread they put out.

Initially I thought that this  year because of another trip we have planned close to Thanksgiving we should have a quiet little Thanksgiving for a few friends at home so I set out looking for a Heritage Turkey. Our friend Charlie Abowd of Adele’s in Carson City messaged me that he could get one.

Somehow I completely forgot about the original plan and instead we made reservation to go to the Club for dinner. That is until Charlie once again messaged me the week before Thanksgiving that the turkey was landing. It also turned out that the friends we thought who might join us at the Club had made other plans leaving Ashton and I to celebrate quietly at home with a 10 pound bird that I soon learned was very different from any turkey I had ever tackled before.

After considerable research I decided that the best line of attack would be to Spatchcock this baby make a dry rub and roast it up at the suggested high heat recommended by many that do their birds in this manner.

Now I have deboned chicken and removed the breast bones of up to a 25 lb turkey and never have broken a sweat. I have all the instruments of deconstruction necessary for the task.. but I never have dealt with a bird like this.  First off a Heritage is one tough cookie. The bones and sinew are very strong. Cutting out the backbone proved to be much harder then I anticipated. Fortunately I had Ashton to help and we managed to get that part of the job done with the aid of a hammer and chisel when poultry sheers and knives failed.   Finding and removing the wish bone proved to be another challenge. The anatomy of this bird was significantly different than a Butterball.  Despite the challenges we managed to get it properly flatted and dry rubbed down. 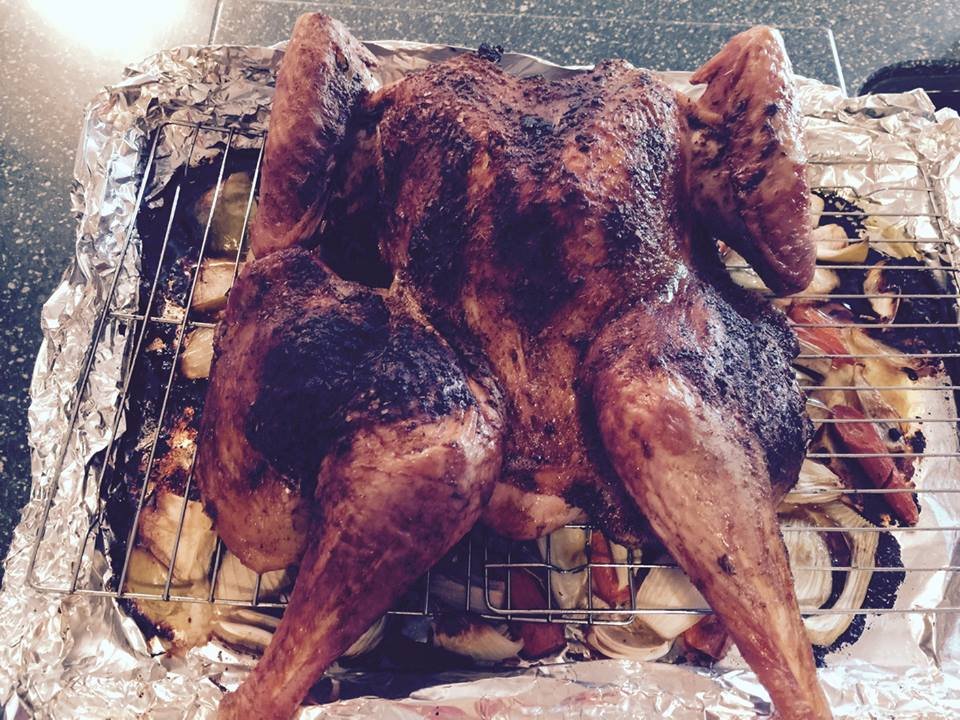 I made a bed of chopped carrots, celery, onion, fennel and apple, popped it into a 450 0ven and in one hour the bird was ready. Beautifully browned, perfectly cooked. Once properly rested I carved it up. This took some effort as well because as I said these birds are strong and require a bit of a learning curve. The carving wasn’t as beautiful as I would have liked, however the the end results more then made up for the lack of precision knife work.

So we feasted on this delicious, fabulous if somewhat frustrating bird, mushroom gravy, simple baked sweet potato with cinnamon and butter, orange cranberry sauce and Brussels Sprouts roasted with shallots and bacon, a fine bottle of Migration Pinot Noir and of course Pecan Pumpkin Pie.

It was a very special beautiful dinner and one that will be longed remembered.

One other thing of note. Even though this was a very striped down Thanksgiving i.e. I did not make stuffing or cornmeal muffins or fresh string bean casserole or sweet potato souffle, mashed potatoes, apple pie or a salad and coconut curry squash soup as I have when I was really into Thanksgiving the various components still took three days.

Of course one of the advantages of making Thanksgiving is the left overs. Today I will make Ashton’s favorite hot turkey sandwich. Now I am off to get the gravy for the sandwich started, put up a big pot of turkey soup plus bake another pumpkin pie.

I do love to cook and to entertain but all things considered I think we’ll go back to Napa next year. That being said the next time I roast up a chicken it will differently be spatchcocked and if I so decide to get in the mood for another Thanksgiving at home I will do the same with the turkey. It’s the only way to go.