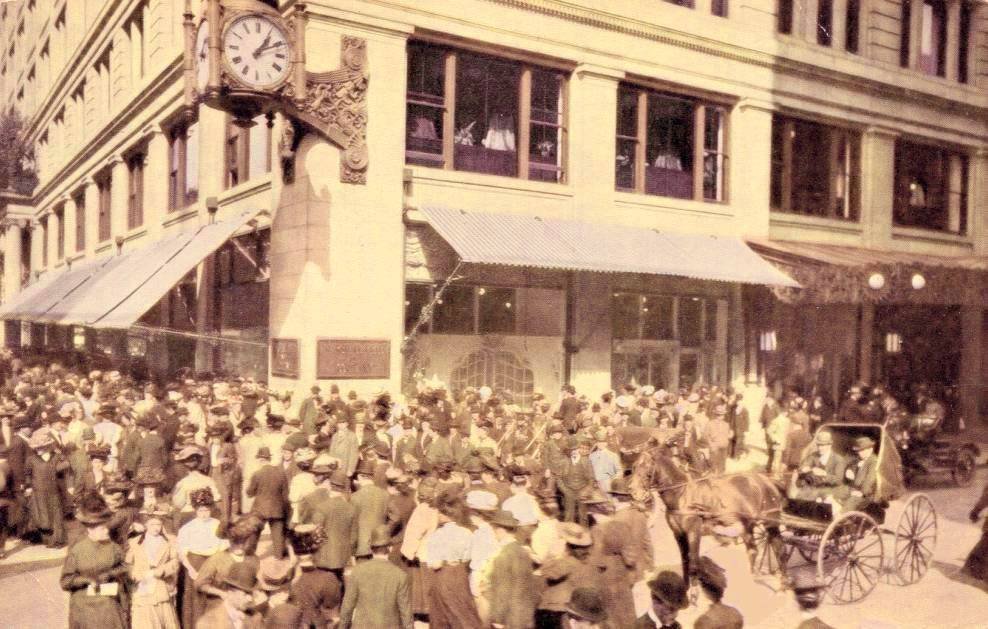 My mother said when the family arrived in Chicago my Grandfather bought their house outright with gold coins. They settled on the south side of the city.  I’m not sure where their first house was located, but I know about the house on Marquette Avenue where my mother mainly grew up and where my earliest memory occurred.

Grandma’s sister Naomi had come to America before Grandma and Grandpa and had settled in Chicago.  That was most likely the reason the Kromelow family ended up in that part of America because Naomi’s husband Bernard Porwancher had family that had settled there.  There is an extensive Porwancher family in Chicago and like all of us they are now also scattered across the states.  Naomi died in 1927 and is buried at Waldheim Cemetery in Chicago.

The first Kromelow baby born in the USA was Theodore, the fourth son, on September 16, 1909, followed by the second daughter Pearl born March 10, 1911, the fifth son Joseph born November 8, 1912 and the third daughter and last baby, my mother Ruth was born February 28, 1914.

Grandpa was hired by Marshall Fields to design furs and he also received awards for his courtier designs. Being a man that did not like to work for others he went into business for himself. Unfortunately ready-to-wear was on the rise and the Great Depression hit. Life was back to being hard. For a time Grandma had a fish market. Grandpa did furs and gowns for those who could still afford them. The house was filled with music because no matter how tough times were Theodore (Uncle Teddy) got violin lessons, Lucille (Aunt Lu) played the piano and Ruth sang.

Harry was maybe 11 years old when he left school and Hy and Jack not much older than that when they went to work to help with the family finances. Higher education and religious education were not in the cards for the eight Kromelow children. Grandma did not keep a Kosher house, none of the boys were Bar Mitzvahed but it was nonetheless a Jewish home with its own traditions and all the Holidays were observed.

The Kromelow kids were down to a man and women bootstrap babies. None of them had any more than a year or two of high school. I’m not sure if Teddy graduated high school but he did attend the Chicago Music Conservatory and was a very talented violinist, Joe became one of the first court stenographers (somewhere we have a picture of him sitting behind his stenographer machine in court and later, according to my mother, Joe got a degree in agriculture from the University of Illinois. My mother, Ruth, worked jobs selling jewelry all over the states and somehow managed to get a nursing degree from Michael Reese Hospital even though she too never graduated high school.  What they lacked in education they made up in street smarts and in the end, everyone made a success of their life in their own way.

The Kromelow house was also filled with animals. Grandpa had two American Bull Terriers, Mutt and Cooch among other dogs, that were just the meanest dogs that were ever put on the earth according to my mother. Mutt was so tough that one time when Grandpa had him out for a walk a man with an Airedale challenged him to have their dogs fight. Grandpa warned him to not let his dog off the leash but the man was spoiling for a fight. He let his dog go and the Airedale charged attacking Mutt who was still being held by Grandpa. In less than two minutes the Airedale was dead. Mutt had severed the Airedale’s juggler.  No one messed with the Kromelow dogs or dared step on the property except for family if those dogs were loose. They were also the bane of the Kromelow girl’s existence because the Kromelow boys had taught them to go after the girl’s silk stockings when they were hanging on the wash line. Supposedly they feed them gun powder. At one point Grandpa also raised canaries and my mother said he put marijuana seed into their bird feed because it really made them sing.

By 1937  Lu, Jack, Pearl, and my mother Ruth were married. Harry went to work for Jack, Hy was a manager for Hertz’s Trucking Division first in Chicago and then in Pittsburgh and Teddy was playing with several Orchestras and frequently on the road. All of the chicks had left the nest and it was time for another chapter.

Among Grandpa’s many talents was his skill as a gardener.  He raised the most beautiful roses and other flowers and had a small vegetable garden at the house on Marquette Avenue.  It was this love of animals and gardening and Uncle Joe going to agriculture school that led to THE FARM!  I believe the house on Marquette Avenue was sold in 1940 and the River Ranch Farm located in Marengo, Illinois was purchased.

The War and the Farm shaped my early childhood years and though most of my cousins and most of my mother’s brothers and sister were not much involved with it, coming out only on occasion I was there from spring planting through harvest and often in the winter as well before I started school. It also kept all the Kromelow boys with the exception of Uncle Teddy out of active service in World War II because Harry, Jack, and Joe were involved with it and it was a critical industry. Almost everything the farm produced went to the Great Lakes Naval Airbase.  I remember the Military Trucks coming out twice a week to pick up milk and eggs.  Uncle Hy was also in a critical industry during the War. He headed up logistical operations for Hertz Trucking as part of the war effort that moved supplies over the Burma Road among others.

Each of the Kromelow children have their own life story. I hope to gather those from my cousins and add them to this Family History blog.