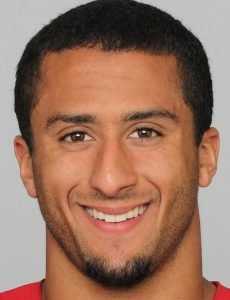 I do not know who Colin Kaepernick is outside of the facts that he comes from my community, he’s a football hero, plays for the SF 49rs and is a man of mixed racial heritage that was adopted as a child by a white family and has ever since supposedly lived a life of privilege.

Recently he did something totally unacceptable. No he didn’t rape any one. He didn’t steal any thing. He didn’t take a life. His sin was that when our National Anthem was playing he did not stand. He sat it OUT. His sin.. He SAT DOWN.

OMG.. This guy makes millions. He’s our hero he owes us. He needs to be our shinning example of what it means to be not just a football hero but an American ideal. YOU DO NOT SIT DOWN WHEN OUR NATIONAL ANTHEM is played.

So it has always been. Our heroes need to be be GODS because.. They can not be anything like us. We need them as examples to be what we imagine we are like and when they are not like what we want in our image we get to KILL them or at lest disown them and Bitch, Moan and Complain about how badly they let us down. It is very hard for us to except that one of our heroes held up the mirror and made us look into it. 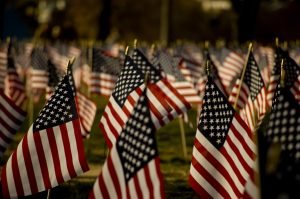 Perhaps we should start at the history of slavery in the United States., or by looking at our national anthem and ask ourselves if it really represents the America we are today and the America we want to be?  Perhaps you need to consider the third verse. The anthem was written in a time when slavery was how life was in these United States. Black lives did not matter. Black lives and indentured servants were chattel.. property..not to be counted.

Admittedly we do not sing this when we sing our national anthem but there is nonetheless  something very chilling and certainly no longer in step with who and what we are today.. Or is there?

And where is that band who so vauntingly swore
That the havoc of war and the battle’s confusion
A home and a country should leave us no more?
Their blood has wash’d out their foul footsteps’ pollution.
No refuge could save the hireling and slave
From the terror of flight or the gloom of the grave:
And the star-spangled banner in triumph doth wave
O’er the land of the free and the home of the brave.

I have a confession to make. I have sat DOWN.  I have folded my arms and crossed my legs and bowed my head silently disapproving what I felt was wrong with my country. And I have also marched. I have loudly protested and have done everything I could to try to make this nation live up to the land of the free and the home of the brave.  At least as far as I thought it should be.

BFD. Have you used that right lately? I would like to think that some of what I worked for moved us forward.  The Civil Rights Act 1964, anti-Vietnam, hell anti war.. The Voting Rights Act 1965, plus a lot of policy tax law and stuff with the FDA and the EPA and fracking and Roe vs Wade. And I’m still working on healthcare and burning my bra.

Tell me when your hero didn’t get up for the national anthem, what have you been working for to make America the nation we want it to be for one and and all?  Tell me out side of somebodies idea of patriotism that you have been feed, have you been doing really to make us one nation (indivisible under God) with Liberty and Justice for all.

I do not say the pledge with “under God”. I did’t learn it that way.. and frankly I can’t say it that way easily. I guess you could burn me at the stake because you are all shocked over that. . Just by way of history. This is the Pledge.

Much is at stake in our nation. Perhaps we will never know all the things that caused a football hero, the idol of many to make such a profound statement as to risk the ire of his adoring fans and creating a fire storm that demands us to examine once again what it means to be a patriot. It demands we also take a look at our national anthem and put it in the content of the times it was written.  Maybe we need a new one?

Beyond the action of the man, what is important is that we are having a conversation that goes well beyond his action. Black on Black.. White on White.. Green on Green. What difference does it make. It’s all bull plucky. We all bleed red. We are all one tribe. We are all family.

It is time when we become grown up enough to SIT DOWN to stand up
for what we really are about. Go look in the mirror. Ask why you are upset about this.  Is this what is really important?  You are on a crank about some guy that earns an obscene amount of money for tossing a ball in a stupid game and who is your hero and he let you down..WHY? Or.. what is important is the fact that we really have serious problems?  Now tell me please because I am just asking .. beyond this guy who so disappointed you.. let us sit down and talk.

As I said when I started this. I have no idea who Colin Kaepernick is. But I do know this.. he will probably carry a heavier cross then you will ever know. It’s the one we lay on all our hero’s when we feel they have let us down before we nail them to it.

We all have a vision of America.  It is a blind men and the elephant. story where every one has their 2 cents to put in. America is so much more then anyone. It is a living breathing slogging to the light praying to save the earth, the air and the water  rising above all odds  and needs to be so much more then what any poor mortal ever envisioned.  To be continued.