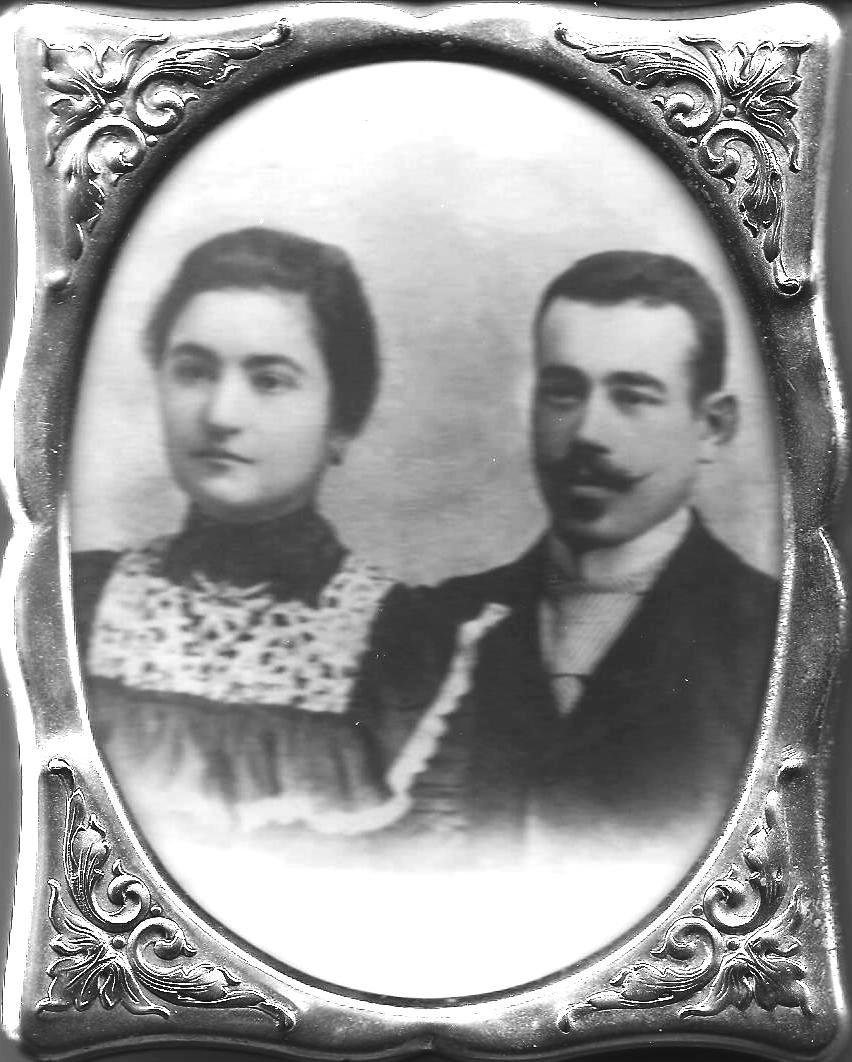 Bertha was about 9 years old when her mother and father sent her from Zhitomir to Lodz Poland. Their reason was to keep her out of harms way because pogroms were frequent and also so she could learn a trade.  Bertha’s sister Naomi who was perhaps 14 years old at the time had previously been sent to Lodz and was in charge of looking after her.

The sisters lived in a Boarding House School environment where they learned how to sew, cook, clean and do laundry. Yiddish was the common language but Bertha also knew Russian and Polish and could speak, read and write in all three.

It happened that after Bertha’s apprenticeships she was hired as governess to the children of a wealthy Jewish family and had the opportunity to meet many young men, one of whom she became engaged too. I have never been sure if her engagement pictures was on the occasion of her engagement to that young man or to our grandfather.  Not long after they were engaged Bertha’s fiance arranged for her to meet his mother.  The meeting did not go well. The young man’s mother according to grandma was a large, gross women who took an instant dislike to grandma.  When his mother was leaving she spoke to her son in Polish, thinking grandma wouldn’t understand. “You want to marry this? She looks like a consumptive”.

Bertha would not put up with such a insult and she new full well that with a mother-in-law like that her life would be miserable. She broke off the engagement. Her young man of course was heart broken.

At the same time of Bertha’s breakup with her fiance Meyer returned to Lodz from Vienna. His arrival created quite a stir in the Jewish Community. Everyone was talking about him. He was educated in Vienna in the art of couture, had the appearance  of a man of the world and cut a fine figure.  Meyer also happened to be the friend of the young man Bertha was engaged to and the friend entreated Meyer to go to Bertha and plead his case.

Bertha agreed to meet with Meyer and the night before their meeting she had a strange dream.  She found herself in a room with a slight elegant women dressed in black wearing a black bonnet tied with a bow, her hands resting on a beautiful walking stick. In the dream the women said “You will never regret marrying my son”. That was the whole dream.

The next day Meyer came calling to plead his friends case.  Bertha told him what had happened and nothing was resolved so Meyer asked if he could talk to her again about the matter.  She agreed.  On his way out Meyer left a picture face down on the entry table. It was a picture of his mother Caroline. When Bertha picked it up and looked at it, it was the same women, dressed and posed exactly the same way as in her dream.

A very fast courtship ensued. In less then a month of their meeting they were married.

The story goes they had quite the wedding and immediately after grandpa hired a carriage and they headed for Warsaw where grandma’s parents now lived.  It was rumored they left in such a hurry because Grandpa who had made all the wedding arrangements skipped out on the bills. They did not stay in Warsaw long. Grandpa felt his talents were better served on a larger stage, Next stop London. England.

Kromolow where we believed grandpa was born is about 108 miles from Lodz.   Zhitomor to Lodz is a little over 486 miles. and from Lodz to Warsaw about 81 miles.