It was somewhat of a family mystery as to how the surname Kromelow came about.  Not much is known about my Grandfather Meyer’s  family history.  My mother told me his parents were Irwin and Caroline and that a picture of her was instrumental in her parents courtship.  Meyer had several brothers who also emigrated to the United States, but I believe they changed their name to Lewis when they came here. To make matters more confusing Meyer was in business with one brother in London and supposedly they went by the surname of James during that time.

It is thanks to my cousin Hilary Joseph who reported that her father my Uncle Joe, told her that Kromolow was the name of Meyer’s hometown and that his real surname was Kifyatkovsky or perhaps spelled Kviatkovsky. She located a district of the city of Zawiercie in modern Poland that is named Kromolow (pronounced Kromowoff with the accent on the last syllable).  According to the website Kromolow is the oldest quarter of the city, and there is other information about synagogues and cemeteries indicating a Jewish presence. In 1847 the Warsaw-Vienna railway was completed. Zawiercie is very close to this important line, which led to rapid economic development. It is certain that the Warsaw-Vienna railway was how Meyer’s mother got him out of the clutches of the Tzar, out of Kromolow and sent him off to be educated in Vienna.

The picture is part of  the Yad Vashem Photo Archive » Kromolow, Poland, Maltreatment of Jews 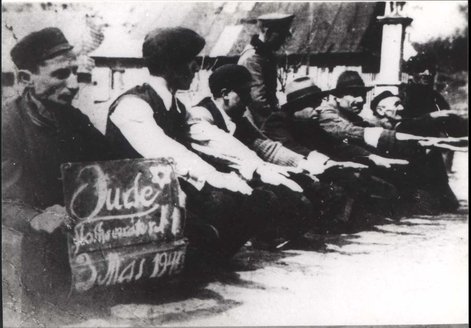 It was a wise move to leave this place.

Hilary’s research on migration generally, in connection with economic development in China, suggests that it is the middle class of a population which tends to migrate, those with resources and higher aspirations, not the poorest people and Meyer’s family fits this profile.

At another website, a search for Kromolow indicates that it was located in the Russian Empire before World War I and in Poland thereafter. The Yiddish pronunciation of the name is Krimilov.

It is not far fetched to assume that in their travels from Poland to England, using the name of Meyer’s home town as a surname was easier to use then his birth surname.  It is also easy to assume that immigration officials would have had an easier time pronouncing Kromolow as opposed to Kifyatkovsky.  The name still had a way to go to evolve as evidenced in the 1920  U.S. Census.

My thanks to my cousin Susan Kromelow for finding the last piece of information. It takes a family to dig up it’s roots.